Dr. Wayne Morris will lead a group of wild plant enthusiasts on a field trip to the Crosby Hillside bog and to the Steep Hollow natural area. As far as I know, this is the first trip Crosby has offered the trip to the Steep Hollow site, a place I have wanted to see for many years. Should be a great day, with many folks filling the pews. Be a part of this fun and informative field day. Turn off the computer and TV and get some nature in, ya’ll.

For 25 years, folks have been meeting for the Bogs and Baygalls event in Kisatchie National Forest. For the last 15 years, this event has been based at the home of Charles and Sue Allen, who live on a property that joins Kisatchie, with the Ouskachitto River in their backyard.

Charles has worked for many years building and managing gardens focused on butterfly attraction. Charles is one of the the leading authorities on Bogs and Baygalls and he has been involved in this fun weekend of events since its started with the help of the late Robert Murray.

I haven’t decided which of these bog events I will attend, but I’m sure they will both be well attended and will be fun-filled days.

We met for the annual field trip at my prairie seed farm Saturday. It was a light crowd, smaller than usual but we were also getting predictions of 60% rain for the day. As it turned out, we finished the four hour event with perfect weather, just as the rain began to come down. 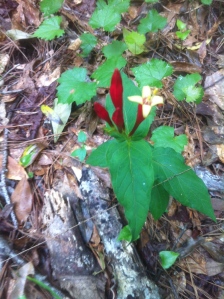 You know you’re getting close to Lipkin Hill when you start seeing the Indian Pinks,  Spigelia marilandica,in the leaf litter, above, and Red Buckeye, Aesculus pavia.

We missed the Native Camellia, Stewartia malacodendron, in flower, by a day, or maybe a couple of days. Two years ago, when we made the trip last, we were a single day late, finding only clusters of stamens on the plants, and petals of the spent flowers on the ground. A rain had come the night before and beaten the flowers off. 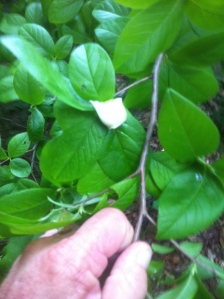 a tight bud of Native Camellia, a giant at fifteen feet tall and wide. The only blooms that occur are way up high where the branches reach for precious sunlight. A thick canopy of old growth trees covers this north facing slope of this River bluff 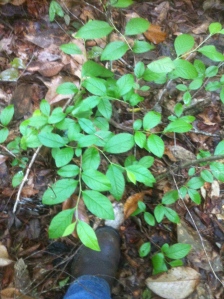 above, a baby Stewartia, a foot or so tall, may be as old as twenty or forty years.

I have been going to Lipkin Hill since 1983. The Stewartias look the same as the first time I saw them. These are ancient plants. My good friend, Dorothy “Dot” Burge, who lived only 500 yards from Lipkin hill since 1945, said that they have stayed the same since she first saw the in the late 1940’s. No telling how old these plants are. 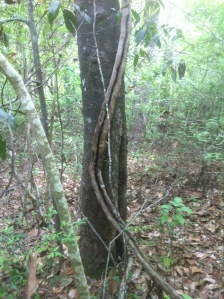 above, an old Magnolia grandiflora with old native Vitus, muscadine vine, lovingly attached.  Rick and his wife Susan were, at one point, only thirty or so feet away and I could barely make them out, the woods are so dense there. 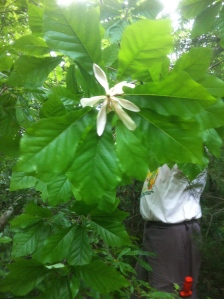 above, here everything reaches upwardly. Rick Webb found the prize du jour, the Pyramid Magnolia in bloom. Here he bends the branch over for this photo of heaven right here on Earth. The flower’s about a foot across in size.

To get to Lipkin Hill, we walked a mile or so into the woods until suddenly the trail drops dramatically off the bluff, into the Pearl backwater. 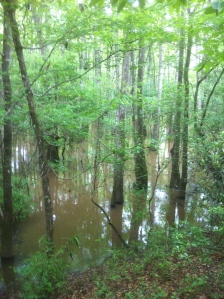 above, looking west into the beautiful Pearl River backwater, standing on the old logging rail spur bed that was cut into the slope, you see a fine second growth of buttressed Cypress-Tupelo-Water Hickory bottomland forest. In summer, when the floodwaters recede, the backwater ground plain fills becomes a mud-flat filled with White Swamp Milkweed, Asclepias perennis, and Cardinal Flower, Lobelia cardinalis. 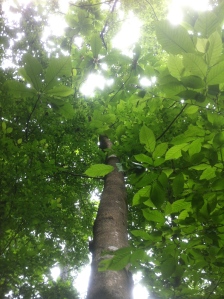 Looking up the trunk of one of the many fifty foot tall Cowcumber Magnolia trees, Magnolia Macrophylla, that fill this west-facing slope of Lipkin. Susan Webb pointed out giant flower petals on the ground that had fallen from the sun filled tops of the Cowcumbers.

Photos of the Week

Coreopsis nudata, found in only one Parish in Louisiana, St. Tammany, on a highway in the south part of the parish, in a pine flat. 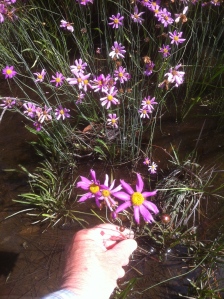 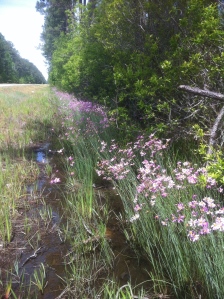 This Coreopsis is an obligate wetland species, not common in the landscape, especially here at the very western edge of its distribution range. click to enlarge photos.

Okay sorry to run all(three) of the readers off with this title, but some of us folks find real excitement in our gardens, using fire(we say “far” here in the deep-south).

When I moved here and started gardening, I encountered a wide variety of invasive plants, some really noxious. Most of them I was familiar with.

I began a planting of meadow shortly after I arrived. I had yanked out the hum-drum day lilies and azaleas and started planting switch and big bluestem, indian and gamma grass. I planted some wildflowers, too, having propagated some, dug some(from my field in Miss.), and collected some seed. I tucked plants in where I felt and sowed lots of seed across both areas

And then watched it progressively get swallowed-up by the invaders.

I tried to burn one year but there wasn’t much fuel to keep a “far” going. So it burned in a few patches here and there. But there was no real impact. Not a hot enough fire. And not enough fire. 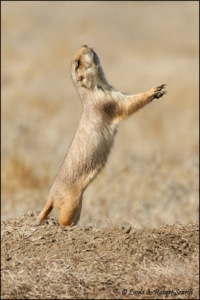 above: Prairie Dog(thats me!) looks for the sky for heavenly gardening inspiration.

I studied and figured and studied some more, for a couple of years. Finally, it hit me like a ton of invasive vegetation. “Fight fire with fire!”, I thought. “I’ll fight the fight and hopefully win-out in the end”.

I conjured up a plan. I would use some of Hitchmough and Dunnett’s ideas(they are the brash and brilliant Brits who I met last month at NDAL). “I’ll use invasives along with natives to help put pressure on the worst weeds and hope it works. My wife Candi is hoping it turns out better, too. She hadn’t been too thrilled with the result in the last couple years. I have quite enjoyed the battle, thank you.

Last summer I gathered some seed from here and yon.

And last week and this week the weather finally broke and it got dry enough to at least walk outside. I hurried to implement the plan.

I started by removing the above ground vegetation. Down close to the soil. There are two gardens, basically, separated only by a mowed path. Both of the gardens are surrounded by mowed paths, as well. The gardens in total are 200 feet long and fifteen feet wide: a long, linear meadow.

Looking back, I should say that if I had done things right to begin with, I may not be in this predicament. I should have spent a season or two killing the invasive vegetation(“nucularizing it”, as George W Bush would say) but like some of my clients, I could not wait. Actually, I thought the native plants and seed I planted might kick invasive butt, but I was wrong. Poor guys didn’t have a chance. They didn’t know what him them.

One garden is now complete: the fifty footer. The other, I chopped on last evening before sundown. The day before, I hauled myself off to Rick Webb’s Louisiana Growers nursery in Amite and picked up plants that he’d been holding for me since before God performed the triple-vortex on us. 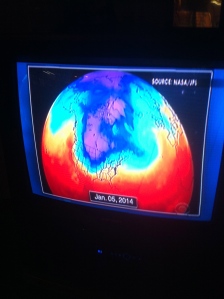 I got the plants I wanted and planted them: 60 one-gallon pots of a grass I became enamoured with on visits to Miami: its basically a very dwarf south Florida version of our native tripsicum, Tripsicum floridanum(Florida gamma grass, Fatahatchie grass). Its a cool dude. 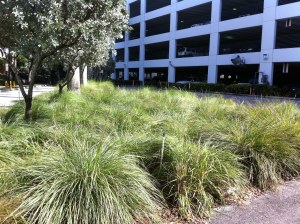 Dwarf Fakahatchie grass is a rare bird in the wild. Only 500 plants still survive in crevices of the low, rocky pinelands of the Miami rock ridge(an old coral reef). This is a photo of a parking lot planting of Fakahatchie grass, Dade County, Fla. Cool, huh?

I got most of my plants planted but before I could even finish, I couldn’t resist to ceremoniously light up a fire. I had gotten few bales of wheat straw to use as “fuel”. I wanted to do a few tests on some really bad areas, sick with invasive skunk vine(I hate that  dreadful plant!). Skunk vine Paederia foetida is a real stinker. Literally. It invaded from the edges and swallowed up whole parts of the meadow. I figured I’d see what fire does it. So I loaded up about a fuel level 2, in three different areas and lit those babies up! 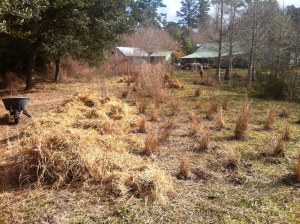 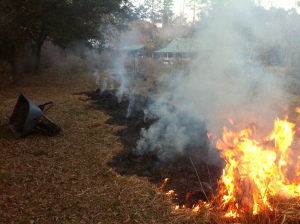 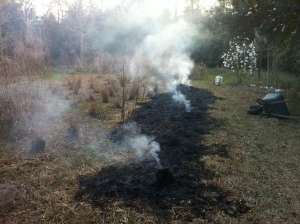 above: Take that, dirty-rotten Skunk Vine!!!! If you don’t think fire is good for your gated community code, you may be lacking excitement in your life. Newly planted Fakahatchee grass clumps to the left of the frame, wishing they were in the burn zone. 😦    Next year they will be a burn zone. Yaya! 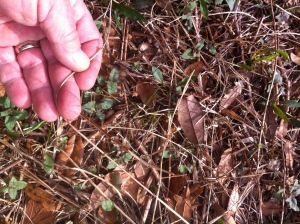 Bee Balm fought valiantly last summer but the skunk vine had a strangle-hold on it that would let up. Maybe the “far” will help old bee blossom mint to overcome the interlopers. That’s me holding the dormant but still very alive skunk vine 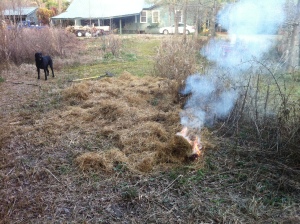 Monty the dog, a bit pensive about fire on the Bee Balm 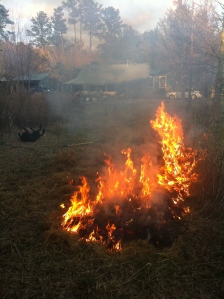 Monty the dog, caring less about the fire on the Bee Balm(funny, click to enlarge photo) 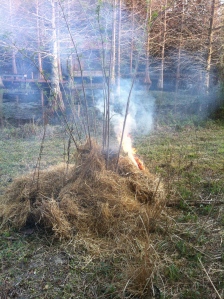 above: an Elderberry shrub settled in on the very edge of my awesome Black Belt Prairie Dock(Silphium Terbinthenaceum) so I increased to a model 3 fuel load there, just to even the odds. 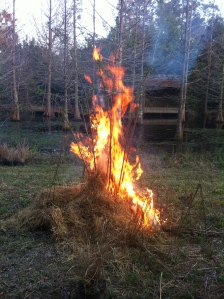 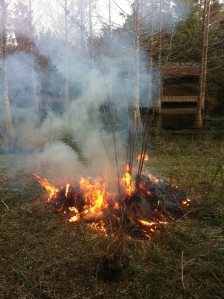 ….and smoldering down after the deed was done 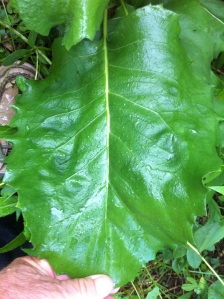 this is the Prairie Dock in July last year. This is a small leaf due to the shade. The leaf will grow to be 20 inches long by 10 inches wide, or more. 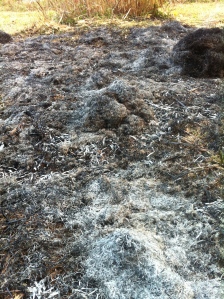 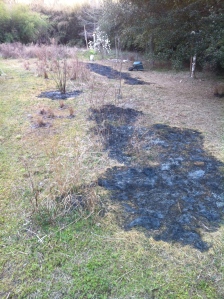 The three far amigos. We’ll see what the result is this coming year.

In the fifty foot meadow, I’ve got about thirty super duper species of prairie stuff. I added the annual Blue Curl’s mint since it grows like a weed and is so petite and beautiful. Lots of seed of Milk Weeds, viridis and obovata, the true Native Thistle(Cersium virginianum), (see this link for awesome photos of this very pretty thistle, by Mr. Jeffery Pippen     http://www.jeffpippen.com/plants/cirsium.htm)

I also seeded Chicory, a beautiful winter annual. Maybe I’ll make some coffee when its done. I added tons of coreopsis tinctoria because I have plenty. And finally, I added a really scary but so amazing exotic thistle, seed I got from a clients stand last year. I say “scary” because it looks super prolific and potentially invasive. But the Horticulturist in me wants this plant badly since it attracts butterflies like no other I’ve seen. I saw it mid-day last October when literally hundreds of butterflies, skippers and other nectar freaks were partying very hard, getting a belly full. Quite a sight it was. I’ll roll the thistle-dice and see what happens.