Imagine a place where venus fly traps grow by the tens of thousands, the clear-white flowers littering the green grassy ground as far as the eye can see. A place where the linear, pencil thick fuzzy foliaged Club Moss, a fern relict of the flora of the dinosaurs still thrives. Dime-sized carnivorous Sundews are everywhere, poking their tiny white flower spikes high above their rosette. Where the lipstick pink flowers of native orchids have grown for a thousand years. The coastal Mississippi peat bog is where you’d be. Its where the soldier-erect leaf-scapes of highly evolved Pitcher Plants, ancient plants, scattered in various patterns punctuated by the occasional charred stump of an old pine and the toasty-crispy burnt stems of some unfortunate shrubs that happened to be a little too flammable to survive here. You’d be atop a deep layer of peat and sphagnum: the highly acidic coastal bog of the great state of Mississippi.

This vision is one that I have still, burned into my memory. It was, at one time, a reality. It was, and maybe still is, the 30 acre Pearl River County Mississippi bog of Mr. Coleman and Mrs. Freda Tarnok.

above: Mr. Coleman Tarnok, photograph from the article by Jeanette Hardy, Times-Picayune, May 12, 2000, titled, Pretty Pitchers  (click on the photo to enlarge)

Not sure if the place is still there. Last contact I had was a call I made to his daughter about two or three years after Mr. Coleman passed. Mrs. Freda had preceded him in death by a few years and I had only on a few occasions, met his son Richard.

My first introduction to the Tarnocs was through Bob Brzuszek, who came on board at the Crosby Arboretum as Curator in 1990. Bob invited me along. We jumped into his pick-up and off we went, to see what all the fuss was. Bob had been in touch with the Tarnoks before that. It was my first visit. The place was a sight for sore eyes, as my Mom would say.

above: a photo from the Picayune Item Newspaper October 21, 1992.  Bob Brzuszeck, Coleman Tarnok, Jane McKinnon, and myself. Bob was picking up Frog Belly pitchers for one of the first Crosby plant sales.

Mr. Coleman was quite a character. A fifth generation florist whose family came from Hungary, he had married Mrs Freda and settled down into the country life in the tiny community of Carriere, about an hour’s drive north into Mississippi from New Orleans. He once told me that he had started raising a few cows, but his cows kept getting stuck in the bogs and he’d have to pull them out so he needed something different to do in that spot other than grazing livestock. He settled on building a wold-class collection of Pitcher plants, species of the Sarracenia genus. And that he did.

Being a fellow who relied of foliage for sustain his livelyhood, he saw opportunity in growing and providing pitchers for sale in the wholesale florist market. After all, he had established many crops from which to harvest either foliage or flower. The Tarnoks had rows of southern magnolia, ornamental cherries and various other shrubs and trees used for cutting, established on drier slopes on the farm. I remember once walking with him to this super-cool spot. The scent of Mexican primrose filled the air, as the plants of this delicious delicacy were lined up neatly, in perfect white rows that took the contour of the hillside. HMr Coleman also grew White Yarrow and Sweet William as a cut flower crop. The Magnolias, though, were most odd and memorable. They had been matter-of-factly trimmed for many years for their foliage in order to make garlands, stripped as it were for weddings and for Christmas decoration. What remained were these tall green collums, pillar-like verticals, twelve or fifteen feet high and about three feet in diameter. Something you’d see done purposefully at Disney World. An odd sight it was, let me tell you. I wish that I had a photograph of that planting today.

Mr. Coleman had collected many different native azalea species and unique selections of species over the years (he claimed he had “fifty different kinds”) and had these in rows, too, for the purpose of cultivating bud clusters for shipping to some of the most renown wholesalers in the country and the world. It was always amazing to me that these plants were very so lush and vigorous, considering that they’d been cut so drastically for their flowers. This taught me that it is really hard to hurt a native Rhododenron with a pair of pruning shears.

Over the years Mr. Coleman collected all of the pitcher species he could find. This was in the pre-internet days, so he didn’t just google it. He wrote letters and communicated on the phone with people who told him about another who had this or that species or species variation. He would then travel to pickup a batch to plant at the farm. That’s what Mr Coleman did. He traveled and dug and then brought plants back home and planted. And then he nurtured. He did this for many years.

By the time I came along, it was “thirty years ago” when he had planted the first plants and he had burned and kept open, the bog, by way of fire. The bog had rewarded his efforts by multiplying the numbers a hundred thousand-fold. Some the plants had begun, over many years, to cross-pollinate, to hybridize. This crossing had produced a number of unique and very significant variations. It was a mind blowing experience to behold all of the different characteristics of the plants in that field. His pride and joy cultivar was a single plant: a hybrid of the western Mississippi-Alabama-Florida panhandle species, Sarracinnia Leucophylla and another unknown parent. The plant had a double flower. As far as I know (at least, he told me back then that), its the only double blooming pitcher plant known to exist: Sarracennia leucophylla Variety “Tarnoc”.

My personal favorites were always the taller-than-normal strain of the White Pitcher, Sarracinnia leucophylla. Taller because it had crossed with Sarracenia flava, the tallest pitcher species, producing a nearly all-white foliage-scape sporting purple venation. Talk about a cool plant! It came almost up to my hip in height.

Mr. Tarnok told me once of how wholesalers in Holland were building acres of glass houses in which to house and preserve his coveted plants. He would ship to Holland each year. His stories were so incredible. But I believed him. He told me they only shipped pitchers in the spring when they were newly emerged from the fire, before they got loaded up with bugs. Pitchers are carnivorous and have a good appetite for insects. He liked to tell you that “Ron Determann of the Atlanta Botanical Garden buys from me all the time!” Another story he liked to tell was when he had guests who he didn’t know well or ones he suspected that they might “lift” something, he’d say “we would tell them to clap their hands to whole time they toured the greenhouse so we’d know they weren’t putting plants in their pockets”.

I have some great memories of trips to the Tarnok’s. I brought my Mom and friend-client Grace Newberger there once just before they teamed-up to paint a bog-inspired mural on the walls of my new house addition. I organized several field trips over the years to the Tarnok farm. I would bring anyone who would go with me. I recall Kim Hawks and Scott Ogden visiting once and I believe that is how Mr. Coleman got the double flowering cultivar into cultivation, by way of Kim’s cajoling and superior knowledge about plant tissue culture. Today you can google Tarnok and commonly see the double flowering pitcher for sale.

I took plant explorer-nurseryman Dan Hinkley, of Heronswood Nursery, there once. He was impressed and he quickly told the queen of theme Martha Stewart who sent  an eight man team of designer-photographer-types from Manhattan to the bog for a magazine shoot.

Most fondly though are the memories of walking the bog with the Tarnoks and sharing it with some of my plant friends. Although that bog is one that anyone can identify with.

I guess its been about ten or twelve years since he has passed, and I have just heard yesterday that the Mr. and Mrs. Tarnok’s daughter Linda is maybe (possibly) restoring this Mississippi botanical gem. I sure hope that its true. To see that field of fly traps and pitchers again would be such a treat. 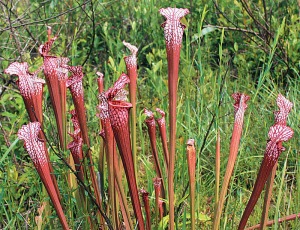 above: the White pitcher, Sarracenia leucophylla 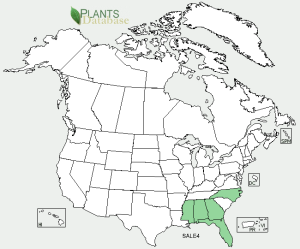 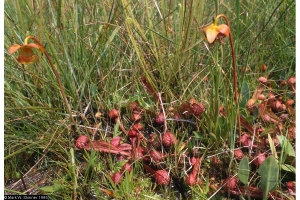 above: the chartreuse foliage of Pale pitcher, Sarracenia alata 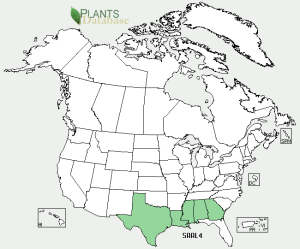 the range of S. alata 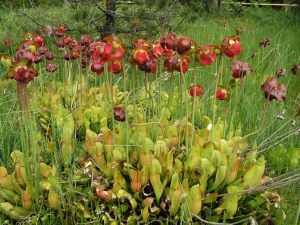 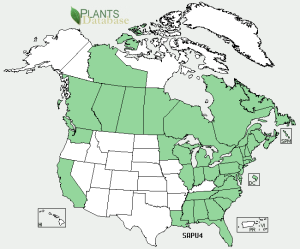 distribution of the Frog Belly pitcher

The one thing I learned from Mr. Tarnok’s bog was how adaptable these plants are once established. Just add fire. pretty cool stuff.