There’s a plant that I grow in the garden that has, over the last few years, performed fantastically, like very few perennials I have known. Forest Phlox is its name. Its a cultivar of the native Downy Phlox, Phlox Pilosa (some call it Prairie Phlox, Arkansas Phlox), a native sun-loving wildflower.

above: a few of the colors, flower forms, of Phlox pilosa at the Cajun Prairie site in 2010

I’m proud to say that I have a very personal connection with this phlox. And humbled to say I  know the two sharp-eyed horticulturists who discovered it. Gail Barton of Mississippi and Peter Loos of Texas found it in “the wild” in Forest County, Mississippi (east of Jackson) and introduced it into the landscape and nursery trade. It has quickly risen to be one of the most popular natives herbs in the East. And for good reason! Its a great plant with all of the highest qualities gardeners look for. It starts blooming by late March, is in its full glory by the first of April, and its last flower is finally fading by the last week of July. What native perennials do you know of that bloom for a solid four months?

click photo to enlarge. a tag from the awesome-lush plants I bought locally recently from Almost Eden nursery, Louisiana

above: a near-dark shot of Phlox pilosa Forest Phlox in peak bloom with Rhododendron viscosum, Summer Native Azalea, with verticals of Buttonsnakeroot coming on a getting ready to bud, in my “white garden” at the house.

above: a month later when the Button Snakeweed is budded up, about June-July. Human in picture for scale not beauty 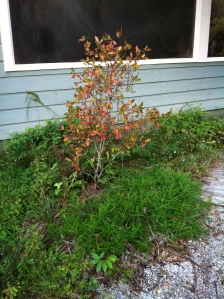 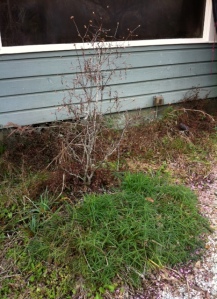 above: Forest Frost this morning in foreground, with Summer Azalea above, and maiden hair fern melted down in the back round by way of polar vortex,. The phlox, like a timex watch, keeps on ticking….

I say that Forest Frost’s most significant characteristic is found in its finely textured evergreen foliage.

Okay, maybe I’m wrong, maybe its the fragrantly scented flowers with their scent of sweet perfume, that actually carries in the air. You don’t have to get on your knees to get the drift. Eau de Prairie Phlox!

The white-as-a-bedsheet pin-wheel-like blooms of this regal herb are borne in large clusters massed on the short terminals of delicate stems, creating a mound of snowy white. Forest Frost seems to stay where you put it in the garden and does well in full sun to mostly sunny conditions. After a few years, you can separate some divisions from the momma plant and move it around a bit, share it.

I read that the nectar rich flowers attract syrphid flies, green sweet bees, hummingbird clear wing moths, bumble bees…..and I say it attracts humans. But butterflies are said to be the primary pollinator for this Phlox.

Peter and Gail, in one of their “prairie hunts”, when they found the plant, took cuttings and propagated it to distribute to growers. For this, in 2006, they were presented with “the Lynn Lowery Memorial Award for horticultural achievement in the field of Texas native plants”(the plant is so likeable, the Texans claim this Mississippi red-neck cousin as one of their own). By the way, everything is bigger in Texas :).

Forest Frost grows to a height of about a foot tall, when in bloom, that is. Most of the year, when its not blooming, its only six to eight inches tall. It spreads pleasantly so, becoming a tiny bit larger(wider) each year. The foliage is deep green and clean. Always pretty. The leaves are very different than the typical P. pilosa, with very narrow, linear leaves of dark green, pointed at the tips. These leaves layer and overlap to make a good ground cover. 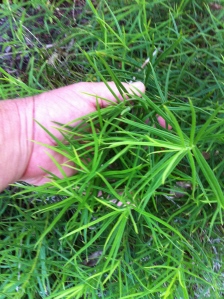 Hey ya’ll, this plant is no chump. It can handle it, whatever the weather. It’s home-turf is Jackson Belt prairie soils: heavy, thick, and dense as iron. And our rainfall here on the Gulf Coast is somewhere near 60 inches annually with usual relative humidity at 90%, so it can definitely hang with the toughest of the southern boys.

And it don’t need no stinkin’, fluffy, prepared soil, either. Just good ol’ dirt.  Plant that sucker and as Tom Dodd 3, of Semmes, says, “get out of the way”. Once established, its there indefinitely. Just don’t plant it where water stays. Its not aquatic.

All it needs is sunlight. Full sun is better good, but it can take afternoon shade and do quite well, thanks. This is not true for most sun-loving perennials. They usually wimp-out in afternoon shade.

What is so significant about this horticultural gem is that it is willing to travel north. Its rated for winter hardiness zone 4 which is way above the Mason-Dixon.

The most-northern state with the most counties with populations of P. pilosa is Minnesota(Minnezota). The lower 2/3 of that frigid state shows pilosa present and accounted for on the USDA plants database. Holy cow, man. It goes clear up to Manatoba, Canada, eh!

A lawn of this phlox would be spectacularly swell, I think. Gotta get me one of those.

Tony Avent of North Carolina, Plant Delights Nursery, grows the plant and Tony doesn’t grow mediocre stuff. He grows only the best plants in the trade. He is one of the premiere mail-order specialty plant nurseries in the Country. He gets it! So there.

But Tony’s got plenty of business so buy from Almost Eden since they’re local folk and their plants are as nice as Plant Delights’. And cheaper.

chime in if you know someone else growing it. that would be nice to hear. peace