Our old farm land in south Mississippi, in the last sixty years, had been dozed and then terraced, planted with Tung oil trees (in the 1950’s), cleared for cow pasture (in the 1970’s) and then attempt-restored with native wildflower and grasses (in the 1990’s). One of the most abundant plants on the property is one I didn’t plant, the somewhat common Willow Leaf Aster, Aster prealtus. Its a dog-gone pretty thing, with lavender flowers on terminal tips and blooms the third week of October. What I heard from Dr. Malcolm Vidrine recently is that it is one of the most important plants for Monarchs on their migration south on their way to winter in Mexico. Malcolm’s comment stuck with me and gave me a new perspective on what I thought was kind of a weedy plant. I was at the farm yesterday and got to see my fields of Willow Leaf Aster in blazing glory. Its a disturbance oriented plant, it seems, found where some sort of soil activity has occurred. That’s why Aster prealtus is so important, since much of our land these days has been disturbed one way or another and many of the high-end nectar plants are simply gone. Aster prealtus and some others make up for that to some degree.

Above: Aster (Symphyotrichum) prealtus, Willow Leaf Aster, outstanding in my field, yesterday. click on fotos to enlarge them…

Also, this week, I found for the first time, a very happy, Late Purple Aster, Aster patens, growing in a planting I planted 13 years ago this month, at the farm. Whoa! …a new species for the farm! Nice…..   Maybe I just hadn’t noticed it before since a I found a few more just after finding the first. 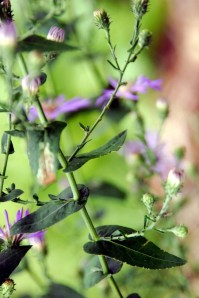 Aster patens is a very nice garden plant, a high conservatism species, a 9 on C of C. Tiny flowers and, a delicate thing. Notice how the leaves are wrapped around the stem, a tell-tail ID trait that separates it from many. 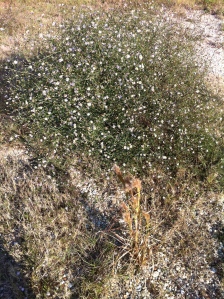 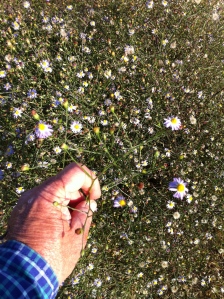 above: Aster lateriflorus, Calico Aster, growing in a highway edge of gravel, with fellow disturbance plants, Bushy Bluestem and Bermuda grass on Highway 25 north of Covington last week. Its nothing but a weed, but a very good weed, indeed. 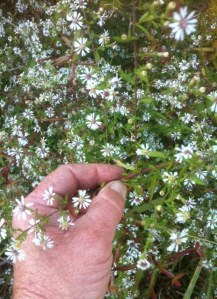 Above: on left, Rice Button Aster, Aster Dumosus, one of our most abundant Asters. and its improved horticultural cultivar?  … Aster dumosus “Kristina”, on right. 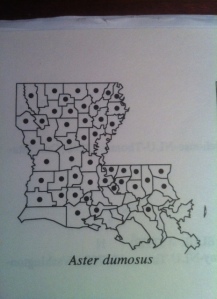 distribution range of A. dumosus in Louisiana. Its just about everywhere, folks.

I took this picture of a very contemplative Monty the Dog, posing next to a short, rounded Rice Button Aster plant and he took this one of me, next to a wily, gigantic Rice Button, at the edge of the pond. Both of these plants showed up as seedlings and were then left to grow.

above: This is the most-endearing Aster pratensis, growing with Swamp Sunflower, Narrow Leaf Mountain Mint and Little Bluestem grass Cajun Prairie Society Restoration Project, Eunice. A. pratensis and A. concolor are nearly identical, Charles Allen says. Pratensis is to the west of the Mississippi and concolor is to the east. This is a stunningly beautiful flower, big (a little smaller than or about the size of a silver dollar) and a good Mardi Gras color purple, found in high quality late succession natural areas. These would maybe never be considered a marketable ornamental plant because the plant is usually a leaning stalk with a flower or three at the tip. But it seems it could be a parent for horticultural breeding program, huh?

above: Jim Foret checking the bee hive at the edge of Charles Allen’s butterfly-bee garden, October 8, 2014, Pitkin, Louisiana. Jim donated the hive to Charles’ bee cause. It was a hive of Jim’s friend who thought it was too heavy to work. Jim packed it into his truck one night last spring and drove it up to Vernon Parish to Charles’. He was checking out the interior bee goings-on before winter to see how they were set up with honey. Go Jim!

Along with butterflies and skippers, native bees and the old world honey bees, wasps are also huge fans of Asters. Have asters and have a host of good insect species that will utilize them. Fun stuff.

I am so darned excited about an upcoming building project I can’t stand it!  …my Kenyan salt pond top-bar bee hive construction project. Jim Foret recommended me looking into it since I told him I wanted to have a working hive around but I didn’t want to work the hive much. I searched Kenyan Top Bar and saw a youtube of U.S. Peace Corps youngsters filming a few guys constructing one in Guinea, Africa. check out how easy it is to build and then find a youtube that demonstrates harvesting the honey and comb. It is so complex, the hive workings, but so simple it seems, to build the hive!

Also, check out a recent paper (2004) by Chandra Sara Bartholomew on native bees done at Abita (TNC), Sandy Hollow (USF&W), and Camp Whispering Pines, in the Florida Parishes.   ….excellent paper, excellent insight and has everything to do with native bees.