It may have been the first plant cultivated by man.

It is thought to have originated in Africa.

A staple of the Sicilian menu, it is known as Goo-Gootz or Cucuzza in Italy(its an affectionate name there, too! “You-a come-a to me-a, my-a little aGoo-Gootsie!”).  In new Guinea, its Zuzza. In Viet Nam, parts of China and the Philippines its Opo. In India its Dudhi. In Japan its Yugao. Korea, Bak, In Burma, Boo Thee. In Columbia and Venezuela its Tapara. In Nepal, Lauka. In Arabic, its Qara. But the most commonly used names for the plant in the western world seems to be Calabash, Cacuzza or Vegetable Zucchini.

There are different varieties of the species ( Lagenaria siceraria or, synonym Lagenaria vulgaris), or possibly (Benincasa hispada). Lots of confusion here. Some are of the shape of the typical Bottle Gourd. Some are very large and rounded. This story is about the elongated green edible variety.

The fruit has been proven to hold viable seed after months at sea. Some think it may have arrived in the New World via ocean currents, but it is more commonly thought that at the end of the ice age when the first adventurous humans crossed the land bridge from Asia (see the amazingly enlightening book, 1491: New Revelations of the Americas Before Columbus, by Charles Mann), it is very likely they were carrying with them, a Calabash or at least some Calabash seeds. Radiocarbon dating indicates that bottle gourds were present in the Americas by 10,000 years ago and widespread by 8,000 years ago. Some of the specimens studied by a research team were not only the oldest bottle gourds ever found but also quite possibly the oldest plant DNA ever analyzed. The newest of their archaeological samples, a specimen found in Kentucky, was just 1,000 years old — suggesting the gourds were used in the New World as containers for at least 9,000 years.

The Calabash can be cooked just as one would cook zucchini squash. The plant is a vine and large in size. The leaf, tendrils and growth tips are used as a vegetable for soups and stir-fry. The fruit can be large, up to three feet, but is usually picked at an early stage before seed develop, at a foot or so in length.

So my project was this: create a large, thirty-five feet long, vegetable Dragon in my backyard landscape from scrap wood and old pieces of hog-wire panels to demonstrate how easy it can be to grow this very huge plant. I think kids would love the adventure of growing the plant since seeing it grow is reminiscent story of Jack and the Beanstalk.

It was really easy since the feed-seed store gave me a sample pack of seeds. I took a pick ax to an old vegetable garden area covered in weeds, and dug a one-foot circle of soil up and planted the seed. Nothing fancy: just turned the soil over. I then mulched the ten feet diameter area around the planted area with old cardboard boxes from Wal-Mart to smother out the existing grass and weeds. I built the structure in about an hour or two and fed the plants regularly (ok, it wasn’t really regularly, it was when I felt like it), and tied the vine like I used to do at the Lee Smith’s tomato farm back in the day so the vine could climb to the top of the “dragon’s” humps. So far, in my first two pickings, I’ve gotten about forty pounds of calabash (if you want some, just holler).

I like to cook it in a dish that is common in the Islanos fishing communities of south Louisiana. Its basically smothered Calabash with shrimp or ground beef(or any other meat) served over rice. Its one of my favorite working-class meals. But you could make any number of dishes with it without meat: a vegetarian Cacuzza soup, perhaps?

above: Ravi Shankar taught George Harrison how to play the sitar (made from a Calabash)

Above: west Africans take part in an annual fishing event using nets to catch the fish and the rounded Calabash to hold them

above: before the turn of the twentieth century, tobacco pipes made from Calabash were very popular (Sherlock Holmes used one) 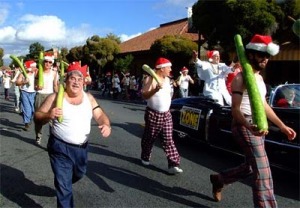 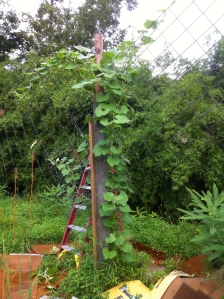 Above: Cucuzzi making its way up the “dragon’s” leg

the “dragon” in full regalia

the flower is about three or four inches in diameter. a night bloomer, pollinated by moths

Cacuzza, going into production mode, just getting cranked-up in September