If you go to parts of southeastern Mississippi and southwestern Alabama, you’ll see large swaths of the landscape covered up by Cogon grass (Imperata cylindrica, a non-native plant). Drive for miles, and you can see that the landscape has been swallowed by this highly invasive grass.

I remember in the late 1980’s admiring the “beauty” of the plant, on the sides of Interstate 10 in Slidel, Louisiana, as I drove back and forth to work in New Orleans from my home in Pearl River County, Mississippi. I was enamored with it because it stood out, and because I wasn’t that smart back then. Then I started seeing it show up in Nicholson, just south of Picayune some years later.

The interstate became a conduit for the light-as-ethyr seed that the plant produces, gaining passage to the northern part of Mississippi and Alabama and beyond, via wind, establishing a foothold and producing more seed, each spring completing the cycle. Cogon needs disturbance to really get going and hurricanes such as the three or four back-to-back hurricanes  in the Florida panhandle and then Katrina, opened-up the landscape: to let it all in.

Where Cogon grows, not much else does. It saps all biodiversity from the landscape, taking in pristine natural areas, farms, country estates, cityscapes and in the case of Mobile and Baldwin Counties in Alabama and Wayne Green and George counties in Mississippi, whole counties. Look at these counties and see what our southern Louisiana landscape might look like in twenty years.

But that is nothing.

Take a jaunt to Covington, Louisiana, in my little part of the world and find a twining vine that will give Cogon a run for its money. Thankfully, I have only found this plant here, and nowhere else.

But its coming to a landscape near you, sometime in the not-so-distant future.

Its  Paederia foetida L.: stinkvine, skunkvine, Chinese fever vine, in the Rubiaceae family. I call it funk-vine, because its got a funky feet smell when you handle it or step on it. Yuck! 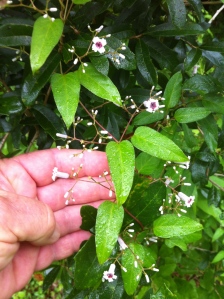 It grows from seed and covers up everything. It could commonly be named “bushkiller”, because it will and it does, but there is already a bad vine commonly called bushkiller, Karatia japonica. Its really a bad invasive plant, too and its only redeeming characteristic is that it doesn’t produce seed. Thank God for that!

The funk vine does. One plant produces thousands of seeds. And it seems that most every one is viable.

This plant will no-doubt give Cogon a run for its money. In fact, it will kick cogon’s ass. Hopefully it can be contained. If it is let loose, it will be pretty bad goings, from then on. 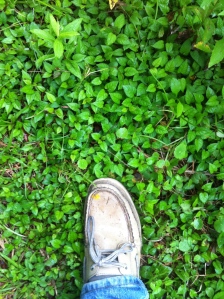 above: seedlings by the score 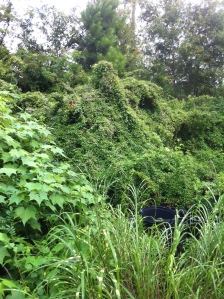 above: mature vines “puttin’ the karate” on the wood edge