As any self respecting southern gardener knows, the Louisiana Iris is unique to the flood plain area of the Mississippi and the Atchafalaya Rivers. There are actually five native species, but four are uniquely native to this food plain. The fifth one, Iris Virginica, is native to just about everywhere east of the Rockies in North America. Before the white man arrived and named them, the Mississippi and the Atchafalaya were one, spanning a hundred miles across south Louisiana at peak flood stage. From New Orleans to Lafayette, water rolled to the Gulf of Mexico. It was the perfect situation, over the last ten thousand years, for these iris to evolve.

There’s a story I heard years ago and it goes something like this. When the first botanists found the red form of Louisiana Iris here in these southparts and brought them back to Europe, they created a sensation in horticulture circles. There had never been an iris found with a red color gene and breeders the world over got really busy trading pollen. I don’t know if the story’s true or not but it sounded good when I heard it. Its pretty clear that in these parts, people have grown to appreciate our most locally endemic genus. The Iris has been designated the official flower of the City of New Orleans and is the state flower of Loozianna. One of the most beautiful sights I think I’ve seen was at the end of the Bayou Coquille Trail in the Jean Lafitte National Park south of New Orleans: at sunset looking west to a thousand acre marsh of Iris giganticaerulea. Pert cool. 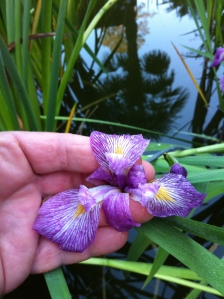 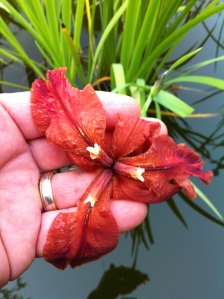 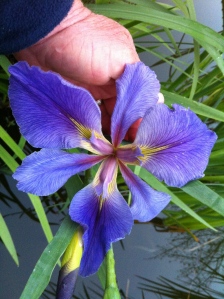 above: a bouquet of orange native azaleas and orange iris for my sweetie

I’m pretty sure the iris has been admired by the natives and the early settlers of Louisiana. You have to be blind to miss it when its in bloom. J.K. Small, a botanist from the New York Botanical Garden described them in the flora of the U.S., in the 1920’s. And the locals took a hankerin’ thereafter, hunting, sharing and hybridizing them. Some folks were really head-over-heals for them. Some still are.

A good friend and major mentor, Dr. Malcolm Vidrine, shared some of the choice specimens of his iris collection with me about four years ago. He has a great collection of over a hundred variations and species, planted in a grid. Since then I have propagated them, shared them and grown them enough to know them. I have some planted in a perennially wet area of the yard and I’ve also potted some of each variety into 15 gallon nursery pots and placed them submerged in water, in the frog pond. They make a brief but stellar show when in bloom.

There’s a list of really robust selections that a nursery-friend,  Rusty McSparrin, of Bois D’Arc iris nursery (Schriever, La) recommends as THE ones that can easily hold their own in the southern landscape: vigorous hydrids that don’t need pampering. Rusty should know. She’s been farming iris for fifty years.

Laura Louise, Cathedral Blue, Chacahoula Cha Cha, Dixie Deb, Ruth Holleyman, Sea Knight, Colorific and Trevor are the ones she suggests. I used these recently in the design of the St. Landry Parish Visitor’s Center water retention basins. The water from Visitors Center roof and parking lot flows into the retention ponds to be filtered by the iris.

Check out the Society for La. Iris at    http://www.louisianas.org

and check this word-up book on them.

There’s a bunch of iris choose from. Lots and lots of colors and forms. I really am inclined to the natural hybrids. These are God-made hybrids that have been found in the wild. Her Majesty, an all-white variation of I. giganticaerulea is my very fave, followed by Cherry Bounce, a natural hybrid of the Abbeville red. Maybe I’m wrong about that(my memory is fading). And then maybe God’s Gift, a seedling that germinated in my friend Bill Fontenot’s front yard ditch: its a real purple-magenta beauty. 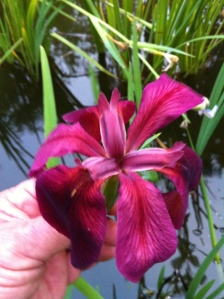 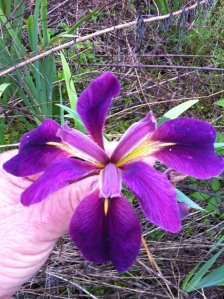 There’s another iris worthy of mention because of its long bloom period and its vigorousness. I think this is the one I got from my brother-in-law Patrick Fett.