A couple of years ago I took a trip with Gail Barton to visit Harrell Prairie and to see if we could find a patch of native rain lilies she had heard of. We found a spot that I recall vividly, and looking at the pictures now that time has passed and especially since it’s dead of winter, it brings back the memories of how wonderful a place it is. Gail and I have been to Harrell a number of times at different times of the year, and we had made many miles through Scott County, Mississippi. Harrell is part of the Bienville National Forest, in the middle of the state. Harrell’s a destination of sorts for those interested in wildflowers and prairies and the critters that live in them: kinda-like Las Vegas for botanists. On the way to Harrell from the interstate, you have to pass a county-owned property where the County Agricultural center and pavillion is.

When in bloom, this sixty acre field is filled with countless numbers of prairie phlox (Phlox pilosa) in shades of what are typically pink or lavender and sometimes white. The smell is a fragrance of delight filling the air. It’s quite a sight when in bloom. It is reminiscent of the scene in the movie, in The Sound of Music, when Julie Andrews sweeps across the short-flowered alpine meadow, singing…”the hills are alive…..”. This plant always reminds me of my Grandma Pastorek, who had it in her garden in old Gentilly, New Orleans when I was growing up as a kid.

These are the two places we usually start when we botanize Scott County, and we end up traveling south, over the Interstate 20, searching as we go, along the roadsides, mumbling something like, “hey, there’s some Zepharanthes, there….yea, and some blue-eyed grass… Silphiums!”.  And we might pull over to see a remnant of prairies, just as an exercise in plant nerdness.

The prairies found in bienville are “island “ prairies. They exist because of the geological fluke of crazyawesome prairie soil showing up in what are otherwise pine soils. There are  68 identified prairie islands in Bienville. These prairies grow in soils that are called Jackson Prairie which are separate, disjunct from the Black Belt or Blackland phisiographic region of Mississippi and Alabama. This “island” chain stretches from the Mississippi-Alabama line in Clark County, Mississippi, to the Delta region, ending in Yazoo County.

The Black Belt is seen above as a red arc stretching from Georgia to southwestern Tennessee. The Jackson prairies are below the Black Belt, in red, painted in a brush-stroke diagonal. 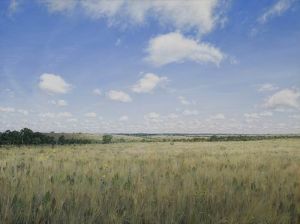 A white form of Blue eyed grass in a disturbed, Indian grass-scattered remnant of a Jackson prairie with a Dollar Store in back round, Lake, Mississippi

The plant communities found in both of these two bioregions are very different from the surrounding Pine forest. The Black Belt is more of a large continuous unit of land while the Jackson prairie sites are usually an acre to twenty or more acres in size and scattered about the region. There are a handful of “inland” prairie sites scattered in middle and upper Louisiana: good examples are Copenhagen Prairie, a  Nature Conservancy property south of Columbia, the Anacoco and Keiffer prairies in Kisatchie National Forest.

The soils are nearly void of oxygen so trees other than “prairie” trees(an oxymoron) don’t grow easily. Trees may establish, but when drought or periods of drenching rains occur, the trees that do settle in are hardly adaptable enough and have a difficult time surviving, especially if fire occurs. 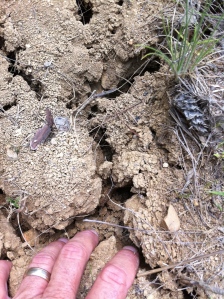 Prairie soils crack and separate(contract) in drought and are quickly and thoroughly saturated when wet. The trees don’t like this situation much, but the herbs don’t mind it a bit.

The result of this is prairie: the authentic natural meadow. 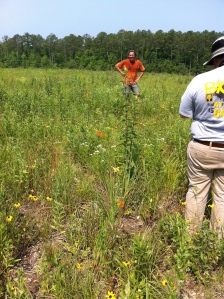 Forest Frost Phlox (Phlox pilosa), a cultivar popular in the nursery trade, originally found at the side of a road in Scott County.

We eventually crossed south over the I-20 and headed for mother load of rain lilies. Just passed a bridge, at a bottom area was a blanket of our white lilies. We said the cursory “wow” and then bailed out to cross a roadside ditch, stepping into the wet shady meadow. 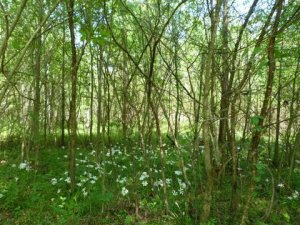 The white of the rain lilies went as far as you could see through the trees, and it was good that I had boots on since the ground was really wet and sloshy. We walked around trying to find easter eggs: plants that are growing nearby, sometimes hidden. There was plenty to see. 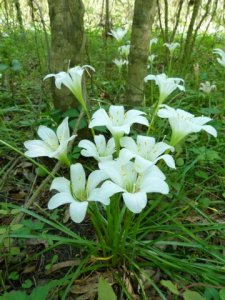 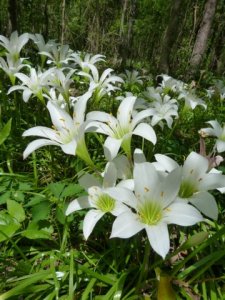 The place was in peak bloom. There was lots of blue woodland phlox (Phlox divaricata), there as well. The powder blue of the phlox was a fab compliment to all of the white. We found some purple trillium (Trillium recurvatum),  and spring cress (Cardamine bulbosa), butter top (Senecio glabellus), Jack in the pulpit (Arisaema triphyllum), wild honeysuckle azalea (Rhododendron canescens), red buckeye (Aesculus pavia) and many ferns including cinnamon fern (Osmunda cinnamomea) and Southern lady fern (Athyrium filix-femina).

2 thoughts on “flowers that matched my boots”